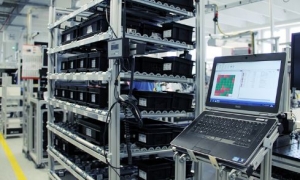 AndonSPEED - call-for-action solution for manual workstations and logistics
AndonSPEED is a unique intelligent and innovative wireless call-for-action system for manual workstations. The system gives an immediate optical warning signal indicating which problem has occurred where. In contrast to traditional simple andon systems AndonSPEED not only shows immediately where a problem has occurred, the data captured can be documented and analysed.

Nowadays the operator simple activates a call for assistance by pressing a button on a switch box located at the work station. This triggers a clearly visible signal tower to illuminate indicating the nature of the problem to be resolved, material required or support needed, for example. At the same time the status change is transmitted wirelessly to the workstation of the person responsible for resolving the problem. The calls-for-action can also be displayed in a control station view on a large screen.