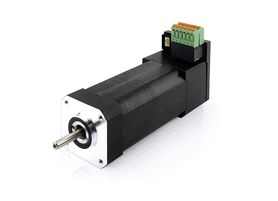 With a flange size of 42 mm, the motors of the PD2-C series are ideally suited for applications that require less torque or have space constrictions, such as in laboratory automation. Both the controller and the encoder are already integrated. The controller can be accessed via USB or CANopen.

The PD6-C is the largest motor of Nanotec's P&D series and features very high power density in relation to its size. It is equipped with both a USB and a CANopen interface and has a nominal torque of up to 8.8 Nm. The PD6-C is available in various lengths and designed for an operating voltage of 12-48 V.

The motor controller and the encoder with 4096 increments are integrated into the motor. All Plug&Drive motors use field-oriented control via encoder and can be operated in torque, speed, or positioning mode. Reference value are set either by clock-direction, two analog inputs, or the CANopen field bus.

The controller is programmed with the programming language NanoJ V2 so that real-time programs for time-critical applications can be run directly on the motor. In stand-alone operation the motor will carry out complex control tasks without a field bus connection. For parameterization a USB port is available.